SPACE is glad to be collaborating with the Human Rights Human Wrongs Festival for the second year. This year we are organizing a screening of short films and a panel discussion on the Russian intervention in Syria. 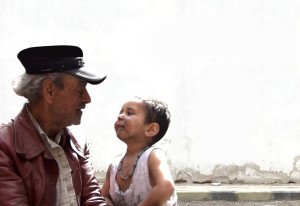 They come in sinking boats. They hide in asphyxiating underbellies of trucks. Their lives are destroyed and their suffering left them with lack of means and choices. But along with the piece of land upon which they live, they have access to a camera, and some of them are making films. Through an hour of short films, this session will introduce the daily struggle to survive and to resist by ordinary Syrian civilians. Through a mix of documentary and poetic expressions, these films have been produced by people who dare to continue to hope, to love, and to stay alive.

Meet Um Wassim and her family in their daily struggle to continue to live and love under the siege in the film “Love during the Siege”. Listen to Abu Al Tayeb, in “Sage”, narrating this period of uncertainty where only the sage tea is left to the Palestinians as a rite of belonging. Go on a walk in the streets of Damascus with Azza through a camera hidden in her purse, in “A Day and a Button”. Follow the journey of the Syrian-Armenian opera singer Kevork from Armenia to Syria to Lebanon, in the film “1915”.

Why is Russia Bombing Syrians? 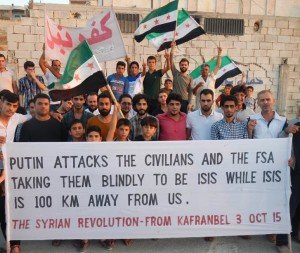 The Syrian sky is crowded with jet fighters from different corners of the world. While none of these is contributing to solving the Syrian conflict, Russia has been specifically accused by Amnesty International and Human Rights Watch of targeting civilians, using cluster bombs and committing atrocities that amount to war crimes.

In September 2015 Russia started its military intervention in Syria to allegedly fight ISIS, but numerous reports suggest otherwise. Who is Russia targeting in Syria? How is the Russian intervention shaping the humanitarian and political scene in Syria? What are the implications of Russia’s support of Assad on stability in Syria, the region and Europe? Can stability and security be established without committing to accountability and justice and safeguarding the basic rights of the Syrian people? What guarantees a lasting peace in Syria?

Two of the short films screened in Syria Shorts: Portraits from Dystopia will be included in the exhibition Troubled Water organized by Kunstplass [10]:

Wars, human wrongs and the refugee situation are complex, and often hard to comprehend from our safe haven in Norway. Our hearts must hence be open and reach out to refugees and other people who are struggling.

The two well-established contemporary artists Bente Sommerfeldt-Colberg and Mari Røysamb are this year’s Human Rights Human Wrongs Exhibition artists. “Time” by Bente Sommerfeldt-Colberg and “Submarine” by Mari Røysamb are complex and monumental sculptures appealing to recognition, and at the same time opening up for new interpretations. The contradiction in these works can give you a sense of unease and ambivalence.

Kunstplass [10] is also organizing a screening of This is Exile: Diaries of Child Refugees by director Mani Y. Benchelah:

This is Exile: Diaries of Child Refugees

The refugee crisis of 2015 was a wake-up call to many Europeans as to the fate of the millions of people fleeing the Syrian civil war, and more than anything the fate of the children. This Is Exile brings us face to face with these youngest of refugees. The director follows a handful of kids through a year of exile, alone or with parents, in Lebanon or Switzerland, and in their own words and their own understanding of the situation we see the raw truth of how war affects them. Without further narration the documentary quietly leads us through both the simplicity and complexity of what goes on in a child’s mind, and shows us both the hope and the hopelessness.  In a time where it seems so easy to forget the individual fates of refugees, This is Exile insists on reminding us.