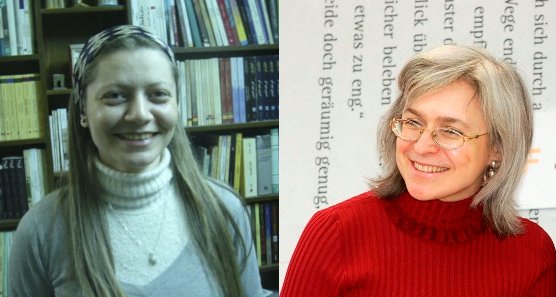 Today we remember the courageous Russian journalist and human rights activist Anna Politkovskaya. Anna is widely known for her brave coverage of the human rights violations committed by the Russian military forces as well as the Chechen fighters during the Chechen war.

Anna was a fierce critic of Vladimir Putin, writing on corruption and repression, particularly in her book “Putin’s Russia: Life in a Failing Democracy”.

Nine years ago, on October 7 2006, Anna Politkovskaya was gunned down as she entered the lift at her apartment building in Moscow.

Razan Zaitouneh started her career in 2001 by defending the political prisoners in Syria.

During the Syrian revolution, Razan co-founded the Local Coordination Committees and the Violation Documentation Center.

On December 9, 2013, Razan Zaitouneh was kidnapped together with Samira al-Khalil, Wael Hamadeh and Nazem Hammadi in Douma, reportedly by the Army of Islam. Their fate and whereabouts remain unknown.

It is not a coincidence that someone is trying to silence the winner of the Anna Politkovskaya Award in Syria, because those who are like Anna and Razan are not welcome by dictators and repressive groups. As Putin rages a new war in Syria, in support of his ally Bashar al-Assad, we need the likes of Razan and Anna in Syria, Russia and around the world, for that the struggle in Syria for justice and freedom is inseparable from global struggles for human rights around the world.