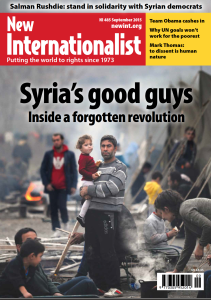 By organizing ‘The Question of Syria’, SPACE aims to portray the ongoing, multifaceted Syrian uprising and to introduce the alternative democratic forces in Syria. In addition to the panel discussions and film screenings, we also agreed with the New Internationalist magazine to distribute the magazine’s September edition on ‘Syria’s good guys – Inside a forgotten revolution’, throughout the event from September 24 to September 26.

In the early days of the Syrian uprising, civil society blossomed for the first time in generations. Despite the destruction, it is still alive. Daniel Adamson, this month’s guest editor, has closely followed the progress of Syria’s ‘good guys’ through the blogs, Facebook pages and Twitter feeds where activists debate the revolution, the war, and the ongoing struggle to build a better Syria. Their stories deserve to be far more widely known, and this magazine is a step towards that end. It includes contributions from Syrian writers, artists and activists and offers an insight into a Syria often ignored by the mainstream press.