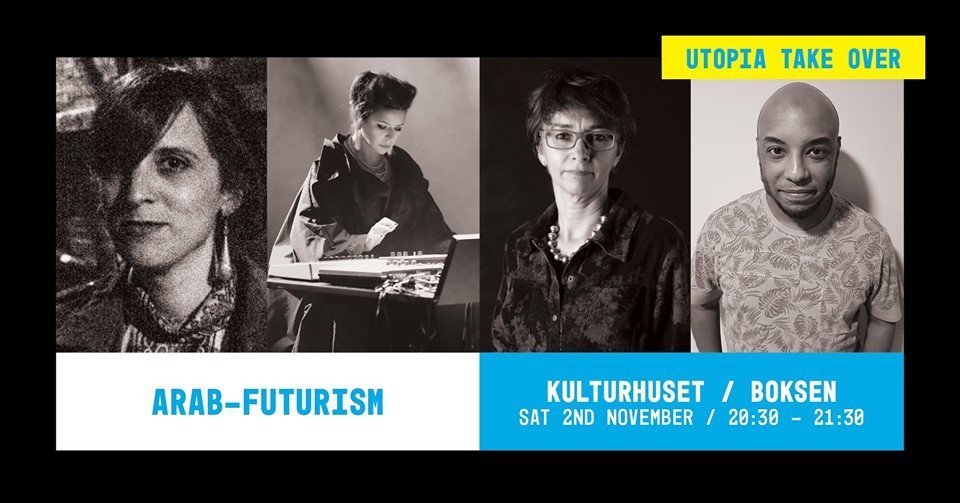 In the aftermath of the Arab Spring, and in the wake of decisive political junctures, how can Arab artists, musicians and authors imagine the future? It is possible to dream of a future that is centered and conceived from and for the people?

In a region that is often haunted by worn-out clichés full of exoticism and the continuous association with war, upheaval and religious conflicts, it is important to highlight the multifaceted plurality of the Arab world and its contemporary art scene.

The talk will be a conversation between artists, around the possibility of turning dystopian realities into a quest for a utopian present and future. In addition, we will screen short films made by Arab futurist filmmakers, curated in collaboration with Khaled Saghieh.

Liliane Chela is a Lebanese graphic designer and multidisciplinary artist living and working in Beirut, Chlela also produces music for short films and contemporary dance. She will be performing the same night at the festival as part of the Beirut & Beyond.

Hadia Gana, is a Libyan artist. She was born and bread in Tripoli, Libya. She graduated from the ceramics and glass department at Tripoli’s university in 1995 and had a masters of ceramic from Cardiff University of Wales in 2005. Along her educational path she worked on her artistic research with ceramics starting with focussing on the aesthetics of shapes and its expressive possibility within restrictions of material and technology. Since the February revolution in Libya, she decided to start a long planned project. Bayt Ali Gana (cultural centre based on the work of her late father) in Tripoli suburb. She regards the creation of this alternative institution as a work in process proposing workshops and ateliers throughout its creation. The multidisciplinary space will propose different programs depending on the visitors interests in a reverse programming method.

Basma Ghalayini is a Palestinian translator and interpreter. She is the editor of Palestine +100 anthology which poses a question to contemporary Palestinian writers: what might your home city look like in the year 2048 – exactly 100 years after Nakba.

Moderator Dalia Al Kury is an award-winning filmmaker and author of 11 documentaries. Her films explore different cultural taboos in the Arab world and have been widely screened on both Arab and European TV channels. Her latest film Privacy of Wounds premiered at IDFA and was nominated for six prestigious awards. Dalia’s upcoming project is a speculative documentary that imagines Palestinians’ future return to Palestine.

In collaboration with Oslo World and the Libya: Before and After project.