The Question of Syria 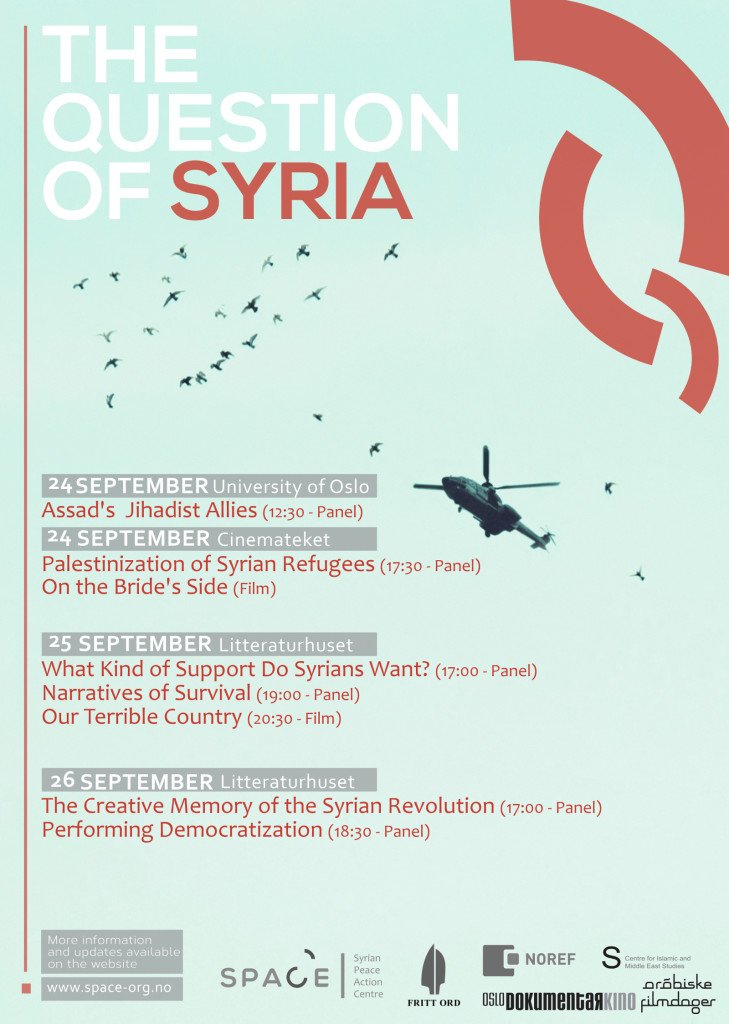 The Syrian Peace Action Centre (SPACE) in Oslo invites you to ‘The Question of Syria’ — a three-day event of panel discussions and film screenings about resistance, art and revolution in Syria, introducing the works of Syrian artists, intellectuals and cultural actors. The Question of Syria will explain the Syrian cause in a common cultural language that demystifies the increasingly complex political landscape through highlighting underreported alternative narratives of the struggle, closer to the aspirations of the Syrian people. The overarching messages of this event are to portray the ongoing, multifaceted Syrian uprising, to introduce the alternative democratic forces in Syria and to provide a forum for interested public in Norway to engage in and reflect on the Question of Syria.

Since March 2011, the Syrian people have been struggling to put an end to decades of imperious tyranny brought about by the stubborn refusal of the Assad dynasty to step down. The consequences of this struggle have been catastrophic for the people who suddenly found themselves isolated in their struggle against one of the world’s most ruthless totalitarian regimes. The Assad regime, and the emergent Islamist groupings that solidified after the revolution have been especially focused on fragmenting and liquidating ‘the people’ as a political and social force. Despite this grim background, the popular uprising in Syria continued; many people still uphold the same values they first rose up for, but now in their everyday resistance they have to face a brutal regime as well as religious extremists.

24 September – Cinemateket
Palestinization of Syrian Refugees (17:30): Yassin al-Haj Saleh, Line Khateeb, Senay Ozden and Hanne Heszlein-Lossius. Moderated by: Jørgen Jensehaugen
The panel is followed by the film On the Bride’s Side