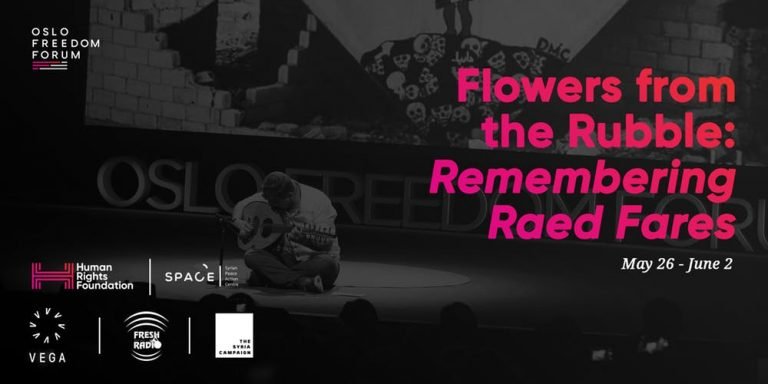 At this year’s Oslo Freedom Forum, the Human Rights Foundation (HRF), in partnership with The Syria Campaign, SPACE, and Vega Scene, will feature an experiential exhibition in honor of Raed Fares, a Syrian pro-democracy activist, citizen journalist, and civil society leader who was assassinated in November 2018 in Idlib, north-west Syria.

Fares was a speaker at the 2017 Oslo Freedom Forum. Two years later, we are honoring his work and what he stood for with a memorial while highlighting the importance of independent reporting in conflict zones like Syria, and the role independent media can play in countering extremist narratives.

“Flowers from the Rubble: Remembering Raed Fares” will be on display at Vega Scene, and open during operating hours.

The exhibition will allow viewers to experience the world of Raed Fares, from the war-torn village where he lived to the darkest places in Syria where he reported on the ground from, mobilized peaceful protests, and to his office where he ran Radio Fresh, a local radio station that continues to provide Syrians with access to unbiased reporting and that counters the fundamentalist narratives of the Bashar al-Assad regime’s propaganda and extremist groups.

Viewers will also learn how Fares succeeded in building the foundation of a strong civil society and how he managed to inspire and draw the world’s attention to his tiny, otherwise unknown village.

Within the exhibition will be protest banners that brought Fares and his town to the world’s attention; caricatures and videos that Fares and his colleagues created to mock the Assad regime and ISIS; audio recordings from Radio Fresh, including the airstrike announcements used to warn town residents of incoming attacks; artwork by various Syrian artists depicting the Syrian conflict; photography of the training centers that Fares built; and the speech that Fares delivered at from the 2017 Oslo Freedom Forum stage.

Free entrance but reserving a ticket is required.